“If anything ever merited a Nobel Prize, this is it.”
Joe Robinson about the theory behind thriveindex

Until the mid-last century, human motivation was seen as a simplistic response function to positive and negative triggers. You probably heard the carrot-and-stick management approach originating from those times.

However, in the 1970s, psychologist Edward Deci ran an experiment demonstrating that human motivation is far more complex than simple trigger-response. He showed that, despite being generally considered a positive stimulus, a monetary incentive to solve puzzles decreased students’ interest in solving them. At the same time, students who had no monetary rewards invested more interest and time into the process.

Subsequent research into this phenomenon led Edward Deci, and his colleague Richard Ryan, to develop the macro theory of human motivation called Self-Determination Theory. It suggests that our motivation lies between two poles – extrinsic and intrinsic – from a low to high degree of self-determination. People are extrinsically motivated when they derive satisfaction not from the task itself, but rather from its consequences, such as external rewards or punishments. Intrinsic motivation, on the other hand, comes from within as it is congruent with personal values and own sense of self. In this state, people are self-motivated and self-determined, because they are driven by the deep satisfaction, interest, and enjoyment of the activity itself.

Since rarely an employee would refuse the extra salary raise or enjoy being fired, extrinsic motivation is a usual go-to for most managers due to its straightforwardness to regulate. Yet, it’s less effective, enduring, and engaging than tapping into the intrinsic motivation of employees. According to Ryan and Deci, the potential to reach self-determined motivation depends on the satisfaction of three basic psychological needs: competence, autonomy, and relatedness. 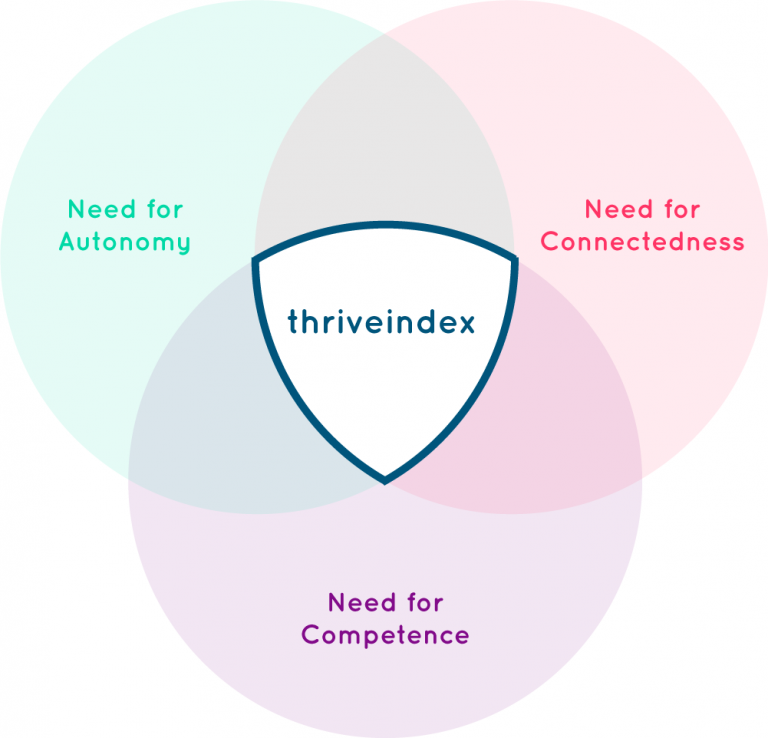 thriveindex is designed to measure the satisfaction of basic psychological needs – autonomy, connectedness, and competence – in your team and organization

The need for autonomy is fulfilled when employees have the freedom to decide on when, where, and how they accomplish their tasks. This can be achieved by offering employees opportunities for personalisation of their work environment – from their schedule to their working desk. It requires trusting one’s employees that they know how they work best – an approach that is the exact opposite of micromanagement.

The need for connectedness or relatedness stems from our social nature as human beings. Strong relationships are essential not only for our individual well-being, but also for effective collaboration at work. To fulfil this need, business leaders should focus on creating a sense of connectedness among team members and a sense of belonging with respect to the entire organisation. Such strategies as team lunches, birthday celebrations, and knowledge sharing meetings are a great way to achieve it.

The need for competence is based on the desire to reach higher levels of mastery in activities that bring joy and satisfaction to the employee and to make a meaningful impact through their actions. Strategies aimed at fulfilling this need should be aimed at facilitating a company’s learning environment, either by offering in-depth training, providing ongoing feedback, or creating a safe space for making mistakes.

Since the development of the Self-Determination Theory, hundreds of scientific research papers have been written connecting the satisfaction of basic psychological needs with positive outcomes both in personal and professional lives. The recent systematic review highlighted that people who have their competence, autonomy, and connectedness needs met at work benefit themselves and their companies in the following ways:

The thriveindex was developed to help managers, their teams and organizations to unlock above mentioned benefits of motivating work environments. By continuously measuring the basic psychological need satisfaction, it not only brings awareness of the current level of people motivation and but also helps designing initiatives for its improvement and measuring the success of these initiatives.

Set up thriveindex in minutes.
Your team will thank you.